Tales From The Outer Zone: The Construction

The fourth episode is now ready to play :) 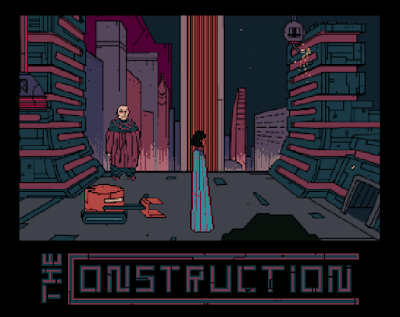 MIND SCANNERS IS OUT ON CONSOLES!

You can now play Mind Scanners on Nintendo Switch and Microsoft Xbox! 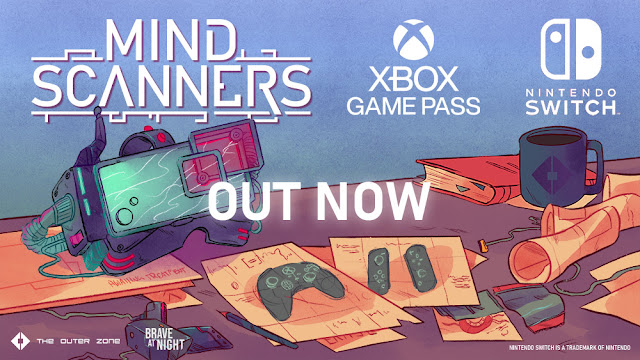 I'll start this blog post almost exactly the same way as I did one and a half (!) years ago:

A lot has happened since my last post on this blog. The game has been completely re-designed (again) and the artstyle is somewhat different (double the pixels and half the colors). See it here.

BUT the Radiophone Broadcast is not about that. It is a development story.
Let's see if I can rewind back to May 2018... almost two years ago.

After spending the cultural grand from DFI and completing the prototype of "House of Lunacy" (as the game was re-named) it was time to put on the business suit and go looking for a bag of money.

As Jesper had left the project to make ends meet - I was the single mind on the project.
I decided to make this trailer:

I sent the trailer, a pitch deck and the prototype to a list of publishers. The ones who answered all gad the same response: "Very interesting concept! We feel the project is a little too early to fund at the moment. Please return when it has developed further." Hmm.. that's good I guess. But also.. hard, as it would be hard to develop the game any further without the money.

But the a MeetToMatch event occured in Copenhagen (where I live). At the event, I pitched the game to publishers and investors. They were all very interested in the core idea, but again I was met with the same response: come back later :)

And then came the big surprise.. Capnova (the only Danish game-investors) wrote me back and said they were very interested in funding the entire project!!! Awesome!!! This meant at least a whole year of production money. I couldn't believe it! 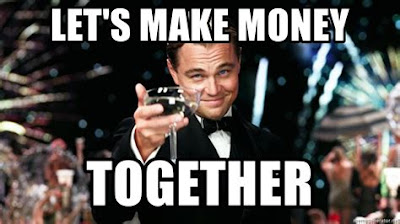 As it turned out - not believing was the right thing to do..
Two weeks after I got the mail, The Danish government shut down Capnova's innovation fund which meant Capnova had to cut me..

But there was a true interest in the project - so I could not let it go.
I even got headhunted by the head of a prominent publisher (they had stumbled upon my trailer!). We had a promising Skype meeting, but the game was not really fitting with their catalogue of games. (I hadn't even contacted them for the same reason). But all this interest for the game kept my hopes up.

What now? Well.. the game had to change. It had to be re-designed to be fun.. but it also needed a makeover. I grew tired of the dark and gritty artstyle and the in-your-face gore.
I needed more colors and wanted to tryout pixel art style.

But I also needed a break from the game - and most of all: I wanted to release something!
So I decided to learn AGS and made a point-and-click adventure game "Cyborg Seppuku" in three weeks.

It was an aesthetic test for Mind Scanners. I tried out a colorful low-res pixel art style and set the game in a retro-futuristic version of the Structure.

The game was well received by critics as well as some of my heroes on Twitter! Oooweee!

Yes.. I forgot to say that I started my twitter account.
Twitter is by far the best way for me so far for spreading the word and getting feedback - can'r recommend it enough!

I also started this blog around that time as a matter of fact.

Now that I had my new artstyle and setting in place, all I needed was money to make the game.
Luckily I received a small grant from The Danish Arts Foundation and decided to spend it on re-designing Mind Scanners from scrap.

I will write about that time in the next broadcast.


THE THIRD EPISODE IS OUT!

Play it at Itch.io and Gamejolt 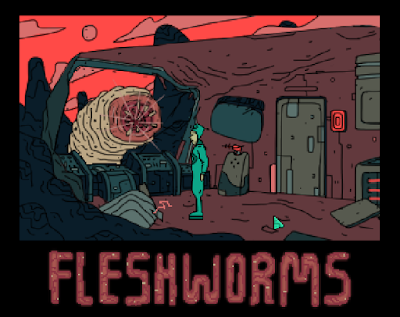 The Goat Crone is out now!

Tales From The Outer Zone - Episode II: The Goat Crone

-An occult yule tale of family love and dark rituals. 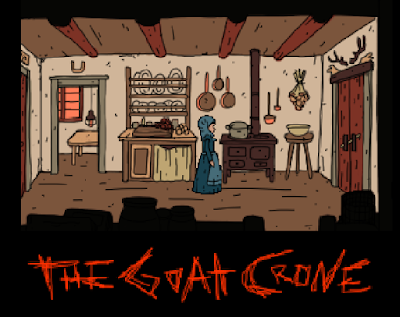 Once more, the game was made for MAGS. This time with the theme of ..."Christmas" :-O
Play the game to see how I solved that problem..

The game is released and free to download here! 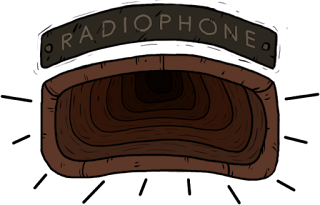 A lot has happened since my last post on this blog. The game has changed its working title to Mind Scanners, it has been re-designed, put into a new setting and the artstyle is completely different!
See the new version here.

BUT this radiophone broadcast will not be about that - this blog post will describe the development of the first version way back in April 2018. This post will tell the story of making this game:

House of Lunacy. Our first attempt of making a psychotherapy simulator.

After making two iterations of the game which did not work, we looked at our budget and saw that we only had one month left. So we needed to make a quick design decision and focus on what worked.

The setting went back to the turn of the century private asylum.
The player was now able to commit up to three patients, and these would influence each other. Catty would lie about the other patients, Hendrick would eat the other patient's food and Damon would make death threats. 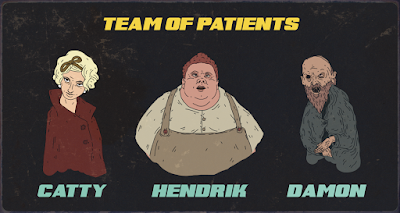 Our biggest design problem was how to design the choice of playing evil/good. We decided to have two different ways of treating the patients: an evil quick and dirty treatment and a slow, complicated and good treatment.

The three patients in the prototype needed a treatment for lying, over-consumption and a foul mouth. All symptoms concerned the mouth. The evil treatment was a grotesque surgical removal of their tongue. We talked a lot about the level of violence/gore of the game, and decided to go take the gore to the max and see what it did for the game.

The good treatment (shown below) was more abstract - a sci-fi machine that removed the patient's symptom with light. In this treatment, the Radiophone dictated what buttons the player should push (like the game Spaceteam).

We wanted the player to work hard for being good, so the good treatment required a higher skillset and more resources. Too many games gives the player a choice of being good or evil, by a simple yes/no choice - but in reality, this is just choosing two different story paths. We want the good and evil to emerge from the player. By making the good path more difficult, the player must make a sacrifice to play good, and earn his/her status as "the hero".

For the artstyle I went for a high-res handrawn and skewed 2D style. The colors where dark and monotone, except the bright orange. Idea taken from Gideon Kiefer - our first reference.

We even managed to add the feature of restraints. If the patiens got stressed, their symptoms would go up a notch, and become more difficult to handle. The player could avoid this by either putting a straight jacket on the patient, throwing the patient in a padded cell or drugging the patient. Drugging the patient would even make them drug addicts..


Story encounters has always been an important mechanic in these kind of games. We wanted to let the player explore the house and have story encounters.

When development time ran out, we had a playable prototype. All in all, the concept was great and the game actually worked. But there was this feeling that it still wasn't there..

The game was unnecessarily complicated and it felt too dark and depressing. And once again.. the main gameplay was a bit neglected. The examination of the patient was boiled down to a big chunk of text and the treatment was.. interesting, surely, but not fun to play. Damn it.

I can't say this enough times. A psychotherapy simulator is such a complicated thing to design!
The final game probably seems like it was designed in a week, but the road to that design has been.. crazy. There, I said it.

Fortunately we learned a lot while working on this prototype and the result made it much easier to test our game design theories and work out our next step. But when was the next step?
The prototype was done and we had no more money, so Jesper had to jump to his other job to work full-time.

I decided spent a month more on the game, preparing it for publishers, investors and applying for a new round of cultural funding. The next Radiophone Broadcast will be about that month (may 2018): business, social media and pitching for publishers.

Thank you and see you next time!
-Malte 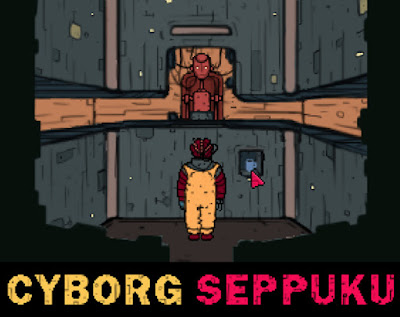 I made this point-and-click adventure game in only three weeks
using AGS (Adventure Game Studio).
It was a blast :D

It's a short cyberpunk adventure about marriage and selfdestruction.